For the past seven years, a group of artisanal fishermen from the San Jorge Bay region of the northern Gulf of California, have been monitoring and actively promoting the conservation of the California sea lion (Zalophus californianus) population on the Island of San Jorge (Bird Island), one of the largest of 13 breeding colonies in the Gulf of California. Isla San Jorge is a federally protected area (along with all of the Gulf’s islands) and a UNESCO World Heritage Site. The local monitors hail from the nearby Fishing Cooperative of Bahía San Jorge, and aptly call themselves the Grupo Lobos, or Sea lion Group. 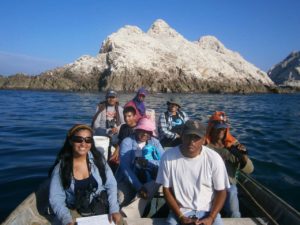 The Sea lion Group is special because they not only recognize the ecological, socio-economic, and intrinsic importance of this large breeding colony but also are actively working to protect it. Taking on the task of spreading awareness about sea lion conservation can be difficult in an environment that is often hostile to sea lions, as a result of their taking prey-fish directly from fishermen’s nets and ripping holes in the mesh; around the world pinnipeds interact with fishermen, often leading to fatal by-catch incidents and/or retaliation from armed fishermen. We are thus very excited that this group of courageous and motivated locals has taken the initiative to build stewardship around this species, uncovering key links between sea lions, ecosystem processes and human impacts. For example, it is common for sea lions to become entangled in fishing nets, and the Group records the number of affected animals, sometimes assisting in rescue operations by trained professionals. Observations on the sea lions’ clupeid fish (anchovies, sardines) diet can also reveal trends in fisheries and ocean temperatures. 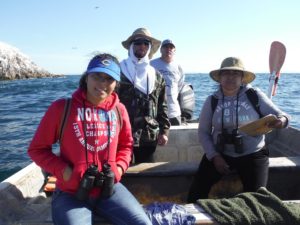 Binoculars, clip-boards and sun hats are all essential when monitoring sea lions at Isla San Jorge. Photo from CEDO archives.

The formation and certification of the Sea lion Group is an important indicator of CEDO’s success in fostering environmental stewardship in northern Gulf fishing communities. The National Commission of Natural Protected Areas (CONANP) and the Center for Research in Food and Development in Guaymas (CIAD for the initials in Spanish) fund the Group and analyze data on the health-status, population growth, and eating habits of this protected species. The Group is also supported by World’s Aquarium, an American non-profit dedicated to protecting the Sea of Cortez, and the Mexican wildlife rescue and rehabilitation non-profit, the Centro de Rescate Rehabilitación e Investigación de Fauna Silvestre A.C.

About The California Sea Lion

The highly charismatic California sea lion is a pinniped, along with seals and walruses, but in the family Otariidae together with fur seals and other sea lion species. Once they were terrestrial mammals, related to bears, and it was only within the past thirty million years that they evolved into the semi-marine mammals of today (Arnason et al. 2006). Unlike true seals, sea lions have (small) external ears, larger fore flippers, and the ability to rotate their hind flippers forward – making them agile climbers on rocky shores. Z. californianus is the only resident pinniped of the Gulf of California, and is subject to special protection in Mexico (NOM 059-ECOL-2001) and listed on the IUCN red list as a Species of Least Concern. Much of the Gulf’s population is migratory, but it is primarily males that travel long distances since adult females generally stay close to rookeries in order to breed and raise pups. The females have a 12-month reproductive cycle and, like humans, a nine-month gestation period.

Mature males (above) can be identified by their large size and “sagittal crest” – a bump on their forehead formed by an underlying ridge of bone that gives them powerful jaw muscles. Illustration courtesy of Carlos Navarro. 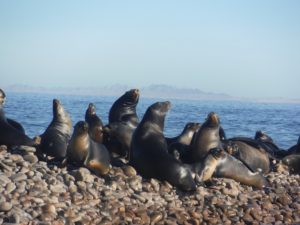 Young males without territories group together in “bachelor-pad” rookeries (above). Photo from CEDO archives. 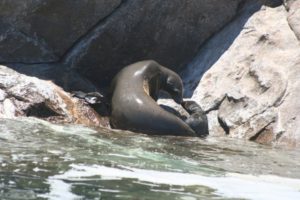 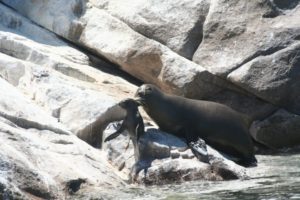 Monitors record this maternal phase as “attending to the pup.” Photos by Alan Ruiz Berman

The breeding season is between May and June, during which males show territorial behavior as they vie for control of area-based harems. The females stay on land for several days before giving birth, and usually give birth to only one pup per year. The mother and pup stay together postpartum for about a week before the female must return to sea to feed, a trip which can take anywhere from 1 to 3 days. After feeding, mothers return to breastfeed their young for 1 to 2 days. If prey distributions change, for example as a result of ocean warming, this feeding-trip can take too long, leaving the pups to starve. Sea lion mothers are able to recognize their young after returning from feeding journeys through smell and sound recognition, making the moments just after birth critical to generating a strong bond that will be vital to the offspring’s survival. During the mother’s absence, the young pups congregate in groups called “kinder,” in which they sleep, bark, play, walk and swim.

As with all marine animals, there is still much to learn about California sea lions, and if you have an opportunity to go on a tour with CEDO, or on your own, to San Jorge Island (Bird Island) or another rookery, we recommend that you be quiet and patient as you observe their many fascinating behaviors. It is important to always keep your distance, from both the colony and individual animals, and respect their space – especially when it comes to alpha males… yes, they will bite if provoked. The noises of boat motors, jet-skis, and tourists, especially during the reproductive season, can disturb sea lions, and interfere in key processes such as pup recognition. If you snorkel or dive with sea lions in the Gulf of California, please avoid reaching out your hands or touching them at all costs, no matter what example your guide sets; wild animals should never be touched or fed for any reason – other than by permitted conservation-biologists. Sea lion pups are playful and curious, but this does not make it ok to pet them. It is of course better to visit sea lions in the wild, where they belong, rather than in captivity. Thank you for your consideration.

By Eleazar López and Angeles Sánchez, translated and edited by Alan Berman.

Eleazar and Angeles are community participation experts, most actively involved in the Coastal Marine Spatial Planning Program of the Puerto Peñasco to Puerto Lobos Corridor Project.