A Procession With a Porpoise, A Call to Action from Mexico’s Capital

Previous Next
A Procession With a Porpoise, A Call to Action from Mexico’s Capital

On February 17th, 2018, on a perfectly sunny morning in the valley of Mexico City, I joined hundreds of people representing diverse organizations and nations outside the severe, cement architecture of the Tamayo Modern Art Museum to reflect upon the fate of the world’s most endangered cetacean, a tiny porpoise that Mexicans call the vaquita marina, or little sea cow. 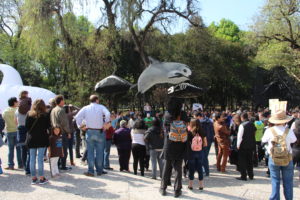 The crowd gathers for the procession at the Museo Tamayo (Photo by Alan Berman).

“What does it mean to lose yet another species, when we have lost half of the planet’s biological diversity in the past four decades? What is it that we are doing wrong – as individuals, as organizations, as nations, and as a globalized society, to have precipitated this mass-extinction crisis? And what will be the result of undermining, to this unfathomable extent, our planet’s biodiversity and our life-support system – a network so complex that its intricacies may forever elude our scientific understanding?” 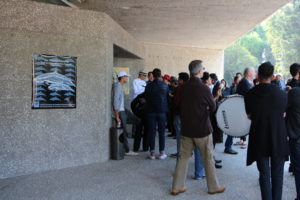 CEDO’s “29 Vaquitas” poster hangs on the wall of the Museo Tamayo at the start of the procession (Photo by Alan Berman). T shirts will be available March 15, 2018.

These are some of the questions that I felt the Mexican artist and conservationist Patricio Robles Gil was posing in the ceremony he conceived for the vanishing vaquita, or Gulf Harbor Porpoise (Phocoena sinus), endemic to the northern Gulf of California, and of which less than thirty individuals remain. Thanks largely to social media, and the magnetic pull of the event’s in-vogue, albeit tragic theme, the event was well-attended; there were hundreds of Mexican elementary school students (many holding up pictures of endangered wildlife), government agency representatives, directors of NGO’s, renowned ecologists, photographers, TV personalities, and concerned citizens. 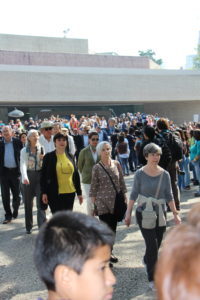 No one, however, donated a trip for a representative of San Felipe or Santa Clara– the northern Gulf fishing communities most directly impacted by this issue. Whether or not they would have attended is another story, for many people in these struggling communities hold the government and conservation sector accountable for decades of inconsistent and poorly followed-up policies. In fact, one week after the procession in Mexico City, a significant group of residents in San Felipe gathered on the streets to protest delays in the payment of government financial compensation for fisheries closures, delays in approving the required Environmental Impact Statement for the controversial corvina fishery (that also occurs within vaquita habitat in the northern Gulf Biosphere Reserve), and the decision made by the Federal Government in early February to expand the vaquita refuge and increase enforcement measures. 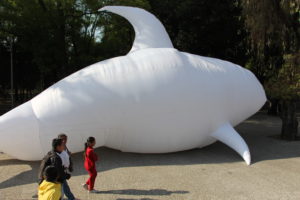 “Every vaquita that dies in a fisherman’s net hurts and affects us deeply,” said Robles Gil in his speech. Metaphorically speaking, this may be a deeply held truth, but should the timid and rarely spotted creature go extinct, it will be business as usual for most of us. Sadly, it is just this “business as usual” mind set that in the northern Gulf, as in much of the world, is driving illegal, unregulated, and unreported activities – in this case the gill-net fishery for totoaba (totoaba macdonaldi), of which the vaquita is collateral damage.

The totoaba, a sea bass of ancient lineage, was once a popular sport fish, but is now harvested exclusively for its swim-bladder, or búche. The supposedly medicinal organ can fetch around $20,000 usd on the black market in China, while the rest of the fish, despite being a delicacy, is discarded. Because the organs are most profitable when harvested from mature fish, eight or so decades old, it is difficult to culture them in captivity.

The “economics of extinction” are such that reducing the population of wild totoaba raises its market value, meaning that Chinese merchants are literally banking on biodiversity loss. With some fishermen making illicit fortunes, and some holding signs that claim “we are starving,” conservation funders and other stakeholders are finding the waters difficult to navigate. In addition, the black market for totoaba is likely linked to powerful cartels.

There are other people, however, including fishermen, community leaders, businesspeople, scientists, and elected officials who really do care about the future we are leaving behind us, and who dare to dream that it is worth more than the cash we can stuff our pockets with today. Speaking to some of these concerned people at the event, it was clear that there were different perspectives among diverse attendees. 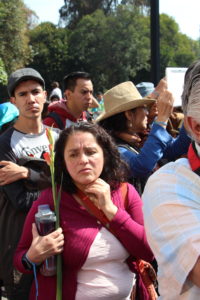 Telling faces of woe show that ordinary citizens are deeply affected by this issue (Photo by Alan Berman).

Is there a fundamental problem with meeting the extinction crisis by focusing on an individual, albeit charismatic, species? And is it counter-productive to gather in the Capital, away from the communities whose fates are most entangled with the vaquita? Or does an event like this do more to unite us with renewed vigor around a common cause? And is it time to mourn what we have lost, such that we can continue pushing for a brighter future without dragging the dead weight of past mistakes? These are important conversations to have, but one thing the crowd silently agreed upon was that the loss of this unique and fragile being, helplessly swimming against the waxing tide of human devastation, represents a national and global crisis. This procession, as well as the protest in San Felipe, were calls to action – as loud and clear as should be needed. 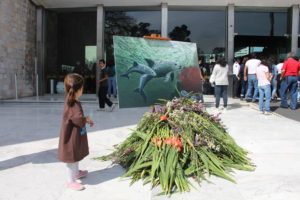 A little girl places flowers on the vaquita altar (Photo by Alan Berman).

The solidarity among people, young and old, of different socio-economic backgrounds, philosophies, and professional organizations, was in my view the essence of the vaquita procession. My uncle, a pediatric surgeon who grew up blocks away from the museum, and my younger cousin, a social anthropologist from Holland, and even the director of the kindergarten I attended too, were there alongside me, together with a host of familiar faces in the field of conservation biology. I felt honored to be fleetingly in their presence for none of us will be on this planet forever.
The Aztec civilization, whose relics the vaquita cranium has now joined in the National Anthropology Museum, is most famous for its unique relationship with death. For the Aztec people to flourish, their Gods required sacrifices, and the dead are ever present, happily returning to share a meal and a shot of fermented agave with the living. Likewise, the vaquita will forever remain an integral part of Mexican culture, and should it become extinct, it’s visage may indeed haunt us, to remind us that its life was no less precious than our own. 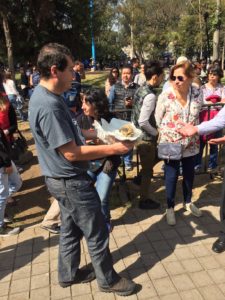 The vaquita skull in a giant clam shell is passed down the line of procession attendees to its resting place in the National Anthropology Museum (Photo by Arturo Ruiz Molina). 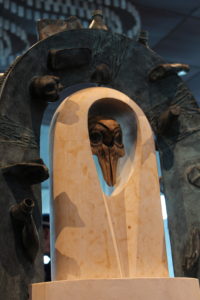 Robles Gil’s sculpture is Spartan, apocalyptic, alien looking, and moving. The skull rests in a horseshoe shape with bronze-casted plastic debris that the artist collected from Mexican beaches. (Photo by Alan Berman, sculpture by P.R.Gil). 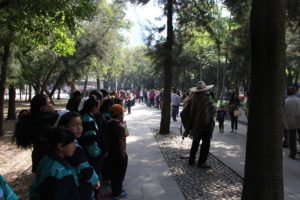 Students and participants formed a snaking aisle, while a procession, consisting of a band (base drums and chimes), a wooden altar (with a famous illustration of a vaquita mother and calf under the green sea)- impressively sustained by a group of small children, and a vaquita skull (held in a giant clam shell), passed between them, proceeded by a flurry of cameras and microphones (Photo by Alan Berman). 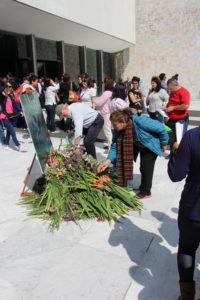 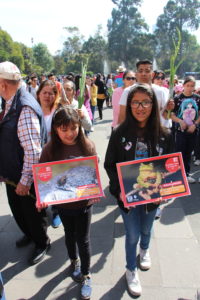 Girls from a local school hold up signs showcasing other endangered wildlife, while others carry funerary flowers (Photo by Alan Berman). 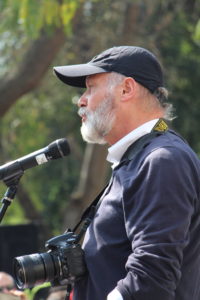 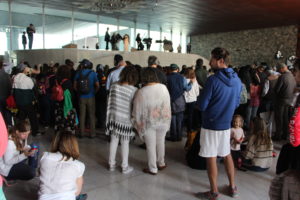 Inside the Museum, atop the entry’s stone altar, reminiscent of the base of an Aztec pyramid, an eclectic band played a dark and eerie tribute to the vaquita; recalling strange submarine sounds and mysterious ceremonial indications. In me, the music inspired the detached sense of loss one might feel at a funeral for a distant relative or a once-great head of state (Photo by Alan Berman). 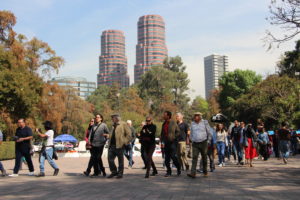 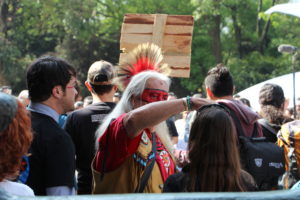 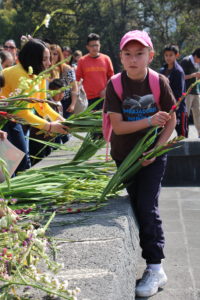 A local schoolgirl gathers flowers for the vacquita altar while wearing a vacquita shirt (Photo by Alan Berman). 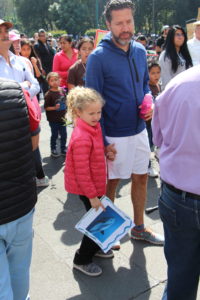 A little girl carries her vaquita artwork to the altar (Photo by Alan Berman). 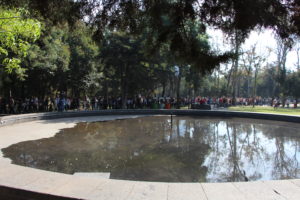 The procession had hundreds of attendees, young and old, from all over the world (Photo by Alan Berman.) 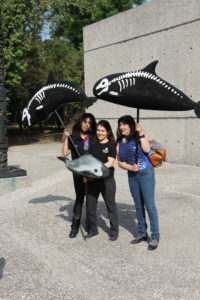 After their third consecutive year in the Gulf of California, the NGO Sea Shepherd has removed 452 illegal nets with the help of the Mexican Navy, saving countless animals (Photo by Alan Berman.)