The Need for Community Participation in Conservation

Previous Next
The Need for Community Participation in Conservation

By Víctor Arturo Ricárdez-García. Víctor is one of CEDO’s Community Participation Specialists in the northern Gulf of California, helping to foster socio-economic and ecological well-being in coastal, artisanal fishing communities.

I am sitting in classroom in Ensenada, Baja California, where I am pursuing my MA degree in Ecosystem Management. It has been just one week since I returned from the fishing communities of San Felipe, Baja California, and Golfo de Santa Clara, Sonora, where I work as a Specialist in Community Participation and Social Development for CEDO, and where I recently witnessed the unsuccessful effort to capture and breed the endangered vaquita marina, or Gulf of California harbor porpoise (Phocoena sinus). 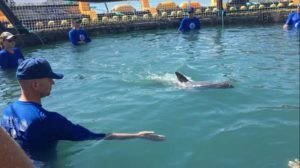 It became apparent to the VaquitaCPR team that the stress experienced by a captured vaquita in a sea pen is too great for a captive breeding program to succeed (Photo courtesy of VaquitaCPR).

“Multivariate analysis is a statistical method used to determine the relative contribution of several factors to an event or result,” my bio-statistics professor explains, but instead of concentrating on the lesson my mind wanders to the pained words of the VaquitaCPR team leaders as they thanked their staff for wholeheartedly participating in a well-intentioned effort that ended, tragically, in death of yet another vaquita female. I recall the salty tears streaming down people’s faces, and regret not having told them how important it is to uphold a positive vision for the future, especially in these times of crisis, and to keep sharing these visions with others. This is not to say that the vaquita is nothing more than a symbol now, unbounded by socio-economic or ecological realities; on the contrary, we must recognize that the few remaining vaquita, and the fishermen too, are flesh and blood beings, both navigating a complex and uncertain future.

It is currently estimated that there are less than thirty individuals of the endemic porpoise left – a number that leaves no question as to the high-probability it will go extinct in the near future. I  can’t stop thinking about the struggling communities where I work, and how top-down vaquita conservation efforts have thus far done little for conservation of the species, while they have devastated local livelihoods. The long-term solution to this social, economic and ecological problem lies in the type of community work that we do at CEDO.   It is imperative that we find  alternative gear types, and methods that will prevent any more vaquitas from being killed, but equally important is involving fishermen in this process to find solutions and to use this gear.  Much more work needs to take place to find alternative livelihoods for these communities and CEDO is leading an effort to identify some of these options. Unfortunately, conservation is a slow process requiring  deep cultural shifts that can take generations to achieve,  whereas species like the vaquita can be lost in just a few decades.  Vaquita are falling in the gap between differing goals of fishermen, government and conservationists, and only by building a joint vision for the future can we succeed in saving them before they disappear completely. CEDO’s cooperative work is being done with the necessary support of the Mexican government and other stakeholders, and it maintains fishermen at the core for building this vision. 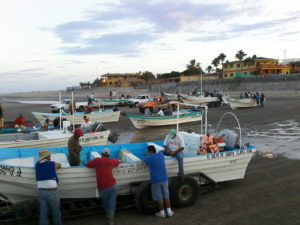 A unified effort to create a better future for communities and ecosystems relies on the participation of local actors. It has never been enough simply to inform communities about the work that government agencies, NGO’s, and other stakeholders are doing on their behalf, let alone on the behalf of a species they know little about.  We have to find  and promote a common cause that is relevant to fishermen and fosters sustainability.  Most importantly, we have to find a way to bury the fishermen vs. government & environmentalists paradigm, and replace it with a cooperative and participatory model that integrates conservation, wise resource management, and sustainable socio-economic development. In order to manifest this sea change in the perception of artisanal fishermen, we need progressive individuals to lead from within, encouraging the use of social media, and even local radio, to build the momentum needed for collective action. These energetic leaders abound among the many high school students that have been involved in CEDO’s Environmental Education Program, and among many of the well-informed fishermen that I have had the pleasure of working with. Indeed, there is a substantial and influential group of fishermen that have tied their boats to our pier, and it is imperative that we now find ways to recognize and reward their best efforts. This can be as simple as providing information that is useful to them, or as complicated as creating new market incentives in places like Tucson Arizona.

Fishermen focus during a CEDO workshop (Photo by Soccorro Gonzales) 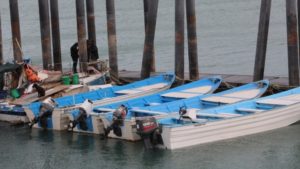 As I automatically open my computer to a file requested by the professor, somewhere beyond the glowing screen of my laptop, I have a futuristic vision of an “forum for the world’s fisheries,” where community members, governments, NGO’s, and other stakeholders meet to make decisions based on the best available science, combined with the most astute local knowledge. I see data based models with huge predictive power, aquaculture facilities that are also schools, solar-powered communities with unique ecological tourism opportunities, and a pod of vaquita porpoises foraging, secretly and safely, on a protected reef. Then the bell rings and I scramble to catch up with the lesson I missed.