Fisheries Monitoring in the Gulf of Ulloa, B.C.S.

Previous Next
Fisheries Monitoring in the Gulf of Ulloa, B.C.S.

CEDO, the Intercultural Center for the Study of Deserts and Oceans, is also active on the Pacific coast of the Baja Peninsula in a biologically rich and commercially important fishing area known as the Gulf of Ulloa – named for the Spanish boat captain who ventured here by galleon in the mid 16th century. 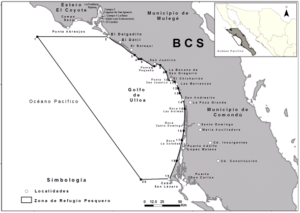 The Gulf of Ulloa, a commercially and biologically important part of the Mexican Pacific (Map from SAGARPA).

CEDO has been working in this region for around three years, collaborating with local fishermen and the Mexican government (CONAPESCA) to monitor fishing activities using video and GPS technology. This work arose largely out of international concern about the endangered loggerhead sea turtle (Caretta caretta), which nests in Japan and crosses the Pacific to forage in these rich waters, sometimes only to end up entangled in fishing nets. 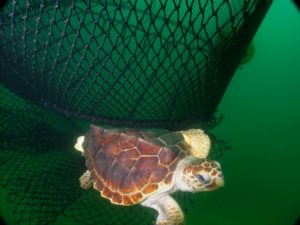 A loggerhead sea turtle (Carreta carreta) escapes from a trawling net via a sea Turtle Exclusion Device, or TED (Photo courtesy of NOAA).

The issue of “by-catch” is one that CEDO is very familiar with, from our work to protect the vaquita porpoise in the northern Gulf of California; by-catch refers to any living organism that is accidentally caught in fishing gear, not sufficiently selective for the species being targeted. Trawling nets and nets left in the water for long periods of time, as well as multi-hooked, baited fishing lines extending for up to a 100 kilometers (“long-lines”), are some examples of gear that will inevitably catch and kill non-target species like marine mammals, marine invertebrates, sea birds, sea turtles, and non-commercial fin fish and sharks. But why is by-catch such a serious problem? 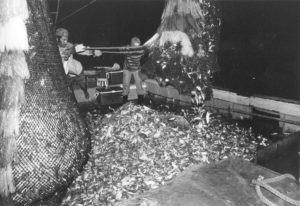 In industrial (large-scale) shrimp trawling, the vast majority of the catch is comprised of non-target species that are then discarded. Photo from CEDO archives.

Ecologically, “by-catch endangers protected species and can have significant consequences for populations, food webs and ecosystems. Commercially, it disrupts fisheries economies and represents an unacceptable waste of the ocean’s limited natural resources (Crowder & Murawski, 2011). One of the reasons that managers have failed to solve this urgent problem is a lack of comprehensive monitoring programs to assess by-catch and provide the necessary data (a gap that CEDO is working to fill) (Crowder & Murawski, 2011).” Also, we might add, fishermen need strong incentives to change the way they fish, especially when they perceive complying with regulations as doing more work for less profits. 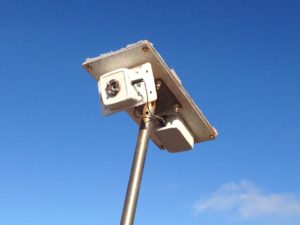 An onboard video-monitoring camera, required by Mexican law aboard fishing pangas in this region, similar to the ones CEDO uses (Photo by Alan R. Berman).

In around 2014, Mexico came under pressure from the United States to study and prevent sea turtle by-catch, and began to take significant actions to address this issue: placing scientific observers on board the small-scale fishing fleet in the Gulf of Ulloa and establishing a Fisheries Refuge Zone (in 2015), along with an annual, by-catch mortality-limit for sea turtles killed by fishing gears. The government currently requires the use of video and GPS recording on small-scale fishing boats when there is no observer present, and has partnered with CEDO to facilitate this logistically, and socially, difficult program. 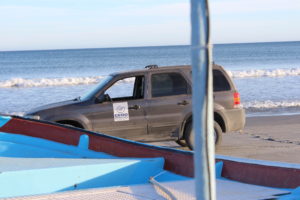 Our team of six-plus project staff must drive more than 400 miles from La Paz, B.C.S., just to collect the data. Photo from CEDO archives.

The results of studies like this one, which will remain confidential indefinitely at the government’s request, can have major impacts on international policy decisions. Furthermore, the way in which this work is carried out can either ease or complicate the already tense relationship between local communities, the government, and the conservation sector in this region; it is not uncommon to see graffiti with slogans like “turtle conservationists go home.” It is CEDO’s aim for local fishermen in this region to have more opportunities to make a living in collaboration with conservation goals, as opposed to being constantly pitted against them, and we feel strongly that we are the right people for this challenging, large-scale operation. 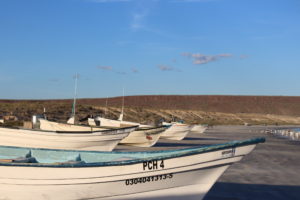 Fishing “pangas” line the beach in the Gulf of Ulloa, where CEDO’s dedicated staff are collecting, categorizing, and systematizing video and GPS data to evaluate, among other things, the degree to which local fisheries impact sea turtles. Photo from CEDO archives