Eco Tours & TalksIntercultural Center for the Study of Deserts and Oceans

Ecotours CEDO offers the opportunity to explore the ocean and the desert. Join us on one of our NaturArte ecotours. Come hike in one of the largest sets of sand dunes in North America, kayak through the Morúa estuary canals or explore the marine diversity found in the tide pools of the northern Gulf of California. Expert naturalists with experience in environmental education guide our tours in order to share knowledge, love and respect for the ecosystems we visit. NaturArte is an award-winning conservation project, designed to strengthen links between tourists, local communities and ecosystems as well as to increase intercultural and environmental awareness. A percentage of the income goes directly to the Matting Conservation Fund. Thanks for your support! If you want more information about the Naturarte ecotours, click on the side tabs in which the tour, itineraries, recommendations, group sizes, restrictions and costs are comprehensively described and included.

WE LOOK FORWARD TO SEEING YOU! 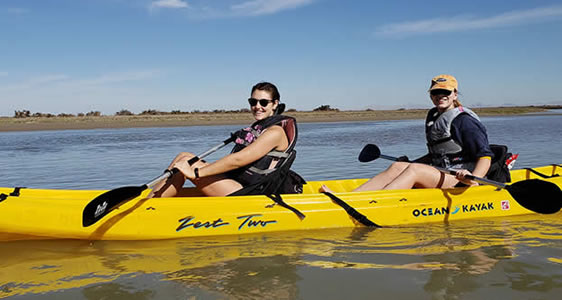 Traverse and explore a typical estuary located in the northwestern Mexican Sea of Cortés, discover the vast diversity of species that inhabit them and enjoy fresh oyster products cultivated and harvested by a local female owned cooperative.

Navigate silently on a kayak through the tranquil waters of one of Puerto Peñasco's estuaries and enjoy watching some of the rare and endemic bird species while learning from an expert naturalist guide all about estuary ecology, biology and human interaction.

Witness the marvels hidden within the aquatic ecosystems of Tidepools, learn about the unique factors associated with extreme tides, the ecosystem and spend hours unveiling the mysteries of life in the rocky intertidal reef with the entire family.

Travel through the Upper Gulf of California on a boat to Isla San Jorge, or Bird Island; a natural protected area under Mexican Federal Government and home to a gargantuan sea lion colony where you'll get the chance to snorkel or scuba dive to better appreciate its rich biodiversity.

Become an oyster farmer for a day and experience first-hand the processes associated with this gourmet and rural economic activity. Interact with the members of Punta Roja Cooperative to learn all about this interesting mollusk whose weight in ancient times was paid in gold by the Romans.

Exhibitions & Gardens When visiting our facilities in Puerto Peñasco, Sonora, you can visit our Botanical Garden by yourself, see our Fin Whale Skeleton, 20 meters long!, Appreciate the hand-painted mosaics of our Sea of ​​Support, learn about the Fish Pupo or puppy of the desert, see a Vaquita Marina Skeleton and go shopping in our Gift Shop. You can also enjoy and learn with our natural history talks on Tuesdays at 2:00 pm in English and at 4:00 pm in Spanish and on Saturdays at 2:00 pm in Spanish and at 4:00 pm in English.

The botanical garden is located on the path that connects our parking lot with the Visitor Center. As you walk you will be able to identify on mosaic plates the common and scientific names of some of the main plants that house the Gran Desierto de Altar, the driest sub-region of the Sonoran Desert.

We hope this exhibit continues to grow and integrate new plates that illustrate the transition between coastal and dune plant communities.

In 1984 the body of a dead fin whale was found in the La Pinta estuary, south of Puerto Peñasco. With the support of several volunteers, CEDO staff collected, cleaned, and assembled the bones for display.

Fin whales are the second largest species of whale, and although the maximum size an adult can measure is 30 meters long, it is only 20 meters long and is therefore presumed to be a young whale.

In a natural history talk, you can learn more about how they filter food with their beards and other clues about the life of whales, the largest animals on the planet.

In 1984 the body of a dead fin whale was found in the La Pinta estuary, south of Puerto Peñasco. With the support of several volunteers, CEDO staff collected, cleaned, and assembled the bones for display.

Fin whales are the second largest species of whale, and although the maximum size an adult can measure is 30 meters long, it is only 20 meters long and is therefore presumed to be a young whale.

In a natural history talk, you can learn more about how they filter food with their beards and other clues about the life of whales, the largest animals on the planet.

The Visitor Center was built with used aluminum wheels and cans and sand, lots of sand, resulting in an efficient, low-impact structure. These types of constructions are known as Environmental Houses.

The CEDO Visitor Center is a complex of two environmental houses, one round with a dome (where our Gift Shop is located) and the other rectangular with a flat styrofoam roof (where the exhibition hall is located).

The construction of the first environmental house was led in 1992 by Jeanette Clifton who donated her energy and spirit to create an alternative construction model.

If you want to learn more about the construction of our environmental houses consult this link or search for books in our gift shop.

In the CEDO gift shop you can buy a T-shirt with the image of our whale or a cap with the CEDO logo to protect yourself from the sun. Our store also offers natural history books in English and Spanish, posters, maps, ecological jewelry, tide cards and calendars, among many other things.

In support of local and regional communities in their efforts to live in harmony with nature, we offer handicrafts from Oaxaca, Chiapas and Chihuahua. From Chihuahua we have beautiful baskets from the Tarahumara and the famous ceramics from Mata Ortíz, a community that has found new life in ancient art, you will fall in love with them.

In the exhibition hall you will find a mobile exhibition on the work of CEDO with the commercial divers of Puerto Peñasco, which illustrates some of the challenges that CEDO and fishermen face in their progress towards sustainable fishing.

In a video, divers who harvest scarlet callus and Chinese snail talk about their commitment to creating marine reserves. Divers won the SEMARNAT National Conservation Award in 2003, thus recognizing their innovative proposal to conserve their fishery. You can also find several showcases with bones of different species from the desert and the sea.

The pupo fish or desert puppy is a species of freshwater fish endemic to the Sonoyta river basin and which is in danger of extinction.

Originally it could be found in the Colorado River basin in Mexico and the United States, in the Salton Sea (United States), and in the Gila and Sonoyta river basins in Sonora and Baja California (Mexico) and Arizona and California (United States) but currently it is only possible to find it in small areas of the Colorado and Hardy rivers, swamps of Santa Clara and the Doctor, and the Laguna Salada in Mexico and in the Salton Sea and its runoff in the United States. You will have to pay close attention because they are small and very elusive.

The Henry Harris Memorial Library is located in the Agustín Cortés building and is open to the public.

We are not able to lend books but we invite our visitors to take a look at it or investigate a topic of their interest.

The library contains 1,350 books and 800 articles and clippings focused on ecology, geology, and local history. In addition, we have maps and videos. If you are a teacher or student of any school in Puerto Peñasco we can schedule a visit with our videos at no cost.

Known as "the castle", the Greek-style building houses CEDO's main offices and its field station. It owes its name to Agustín Cortés, a pioneer who started many collaborations between mexican and american scientists.

CEDO has a laboratory and a library that are open to the public.

Since its founding in 1980, CEDO has been a prime destination for visiting researchers. CEDO is located near a great variety of ecosystems (intertidal rocks, estuaries, rocky reefs, islands and the Sonoran desert), which makes it a key point for conducting research in the region 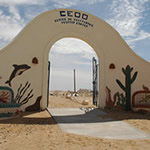 The CEDO field station includes an environmental house that houses a Visitor Center and our gift shop, a botanical garden, a small pool, and various exhibits that can be visited by the general public during the day. The main building, overlooking the Sea of ​​Cortez, has bedrooms, a kitchen, a library, a laboratory, and classrooms for lectures and presentations for school groups who want to spend the night with us. 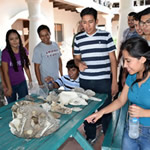 As part of our educational services we offer presentations, guided visits to the coastal and desert ecosystems in the locality, intercultural activities and the opportunity to contribute to our conservation and research objectives through the provision of social, professional or volunteer service. 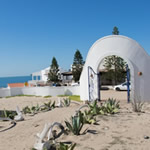 Check our rates and reserve our facilities for your school group here. Click Make a reservation to access the reservation forms.

Arriving from Sonoyta
and the North:

Continue on highway number 8 that becomes Blvd. Benito Juárez entering the city until passing the train line. At the light on Blvd. Freemont (opposite Plaza del Camarón and the City Hall building) turn left. It travels approximately 2 kilometers where you can see the signs for Las Conchas, CEDO and CETMAR. You turn right into a boulvard that turns into an unpaved road. Passing CETMAR high school, you will see the Las Conchas booth. Tell the guards that you are visiting CEDO. CEDO is about 1.5 kilometers further on. On the right hand side you will see the large whale skeleton. There is a parking lot at the bottom of the property and you walk on the ramp until you reach the visitor center and the main building.

Arriving from Caborca
and the South:

Just arriving at Puerto Peñasco you will see a gas station on the right hand side. In front there are signs for Las Conchas, CEDO and CETMAR. You turn left onto a boulevard that later becomes an unpaved road. Once you pass CETMAR high school, you will see the Las Conchas booth. Tell the guards that you are visiting CEDO. CEDO is about 1.5 kilometers further on. On the right hand side you will see the large whale skeleton. There is a parking lot at the bottom of the property and you walk on the ramp until you reach the visitor center and the main building.

If you need to go directly to the main building (for people with special needs) turn right before reaching the parking lot. You turn left on the first street until you reach the main CEDO building. There is parking upstairs but it is limited.